Made by us in the recent past include Taaza Kitchen and Ofen.

A YouTube channel called Street Byte, which is followed by V, occasionally or regularly, which am not very sure of, hosted an episode covering Taaza Kitchen. V got fully attracted to it and decided to give it a try, taking along with him whoever is ready for the trial. We, being food lovers in general, were in for the trial. FIL was out of station and the rest of us decided to go, with A joining reluctantly, as she’s right now not a big fan of South Indian tiffins. I say, right now, explicitly, because I hope she enjoys them as much as I do, in the future days.

Coming to the topic of discussion, Taaza Kitchen is well maintained and has got a nice ambience with friendly staff . Those drawings are eye catching !! 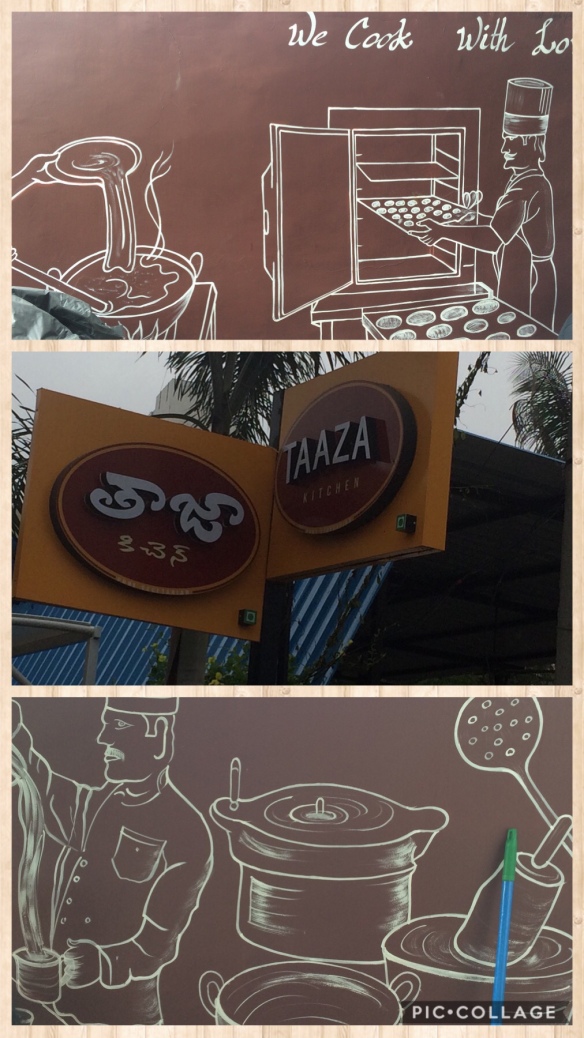 The pricing is quite reasonable.

Everything is served fresh and piping hot and is tasty too. I missed pictures of Dosa, Khara Bath and Kesari Bath, obviously lost in relishing their taste !

If you are looking for South Indian food that’s fresh, tasty and economical, you can definitely give this place a try.

We used this visit as an opportunity to show this part of the city, that’s flooded with innumerable companies, to other family members and gave them an idea of our daily struggles with the commute routine.

Ok, now coming to the second discovery, Ofen was used by us as a place to give A, a treat after her exam results were out.

It’s a small place with an attached bakery.

The automobile, that was used in the times of World War, put at the entrance as a display, is a special attraction.

Photo Courtesy of the above photo : Zomato, as I couldn’t trace the one that I clicked !

What are your discoveries ?

Hoping to discover some more nice things in the coming days…

A had to participate in some sports competitions at school and ended up winning some prizes in different types of running. She got to know that she would be awarded with medals in mini-prize distribution in November. She waited for that day since quite a lot of time , with quite a lot of anticipation.

The day had been announced and A started counting number of hours from the day before the distribution. She was quite excited to receive those medals for the first time.

A was awarded with 4 certificates and 2 bronze medals and 2 silver medals. She was quite happy and moved around with those medals at school. A friend of A too has received a medal and after sometime, she lost it from her bag unexpectedly. So A started being more cautious with those medals. After sometime, she had to go to Computers lab and so had kept the medals in her school bag. On the way back home, she realised that her medals were no longer present in her bag , where they were supposed to be !!

A felt too bad and cried a lot too in the evening for having lost the first ever medals that she had received.

I do not know how and why it has happened that way. I informed her class teacher about the incident and requested her to help A in any possible way.

Other than that, if I look back at that incident, the feeling that I get is whatever has happened is for the good. I am not the one who has experienced the loss, so am definitely not the right person to comment.

The reason I feel that this has happened for the good, is that this gave my little one an opportunity to learn to look at things in the way they should be looked at and to learn to accept all kinds of things in a sportive way .

One thing I want you to learn, dear A, is that nothing lasts forever or nothing goes like the way we want it to or nothing happens the way we plan for. So accept everything that comes across you with a smile, think broad, have least expectations and be thankful for all that you are bestowed with. Master your happiness and don’t let anyone or any incident affect it.

Thank God for the opportunity you were given to take part in those competitions, thank for the fact that you could stand ahead of other participants and thank for being able to experience those wonderful moments where you were awarded those medals and certificates. Rest is immaterial.

Keep smiling, be thankful and move on…

Everything happens for the good…

Some things cannot be left with out a celebration and Birthday tops the list of such things for me. And a celebration for me constitutes family, friends, surprises and food. This year’s birthday was supposed to have been documented quite sometime ago, but it just got late and the explanation or consolation that I give myself is that it’s better late than never !

So coming back to the point, a dear friend gave me this Kurti as a surprise and the birthday celebration started with this ! 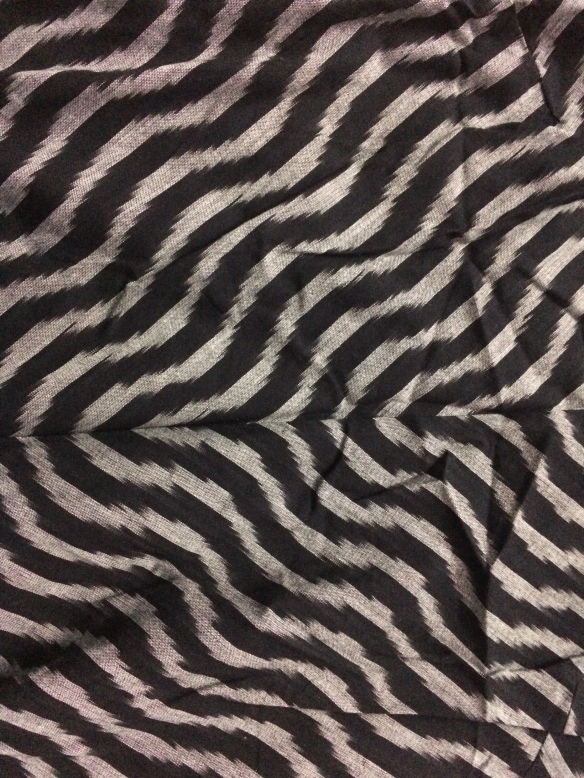 It was exam time for A and I didn’t want her to spend so much time on preparing surprises, but she wouldn’t listen and made these for me and V. I don’t remember making any sort of card or craft for my parents as a kid.

This Birthday had a special characteristic that we commuted to all the places only by Metro and hadn’t used the car at all.

After the annual routine of visiting temple, we decided to try and visit Khairtabad Ganesha. I have been staying at Hyderabad for around 15 years but never have I visited the Khairtabad Ganesha, owing to the huge rush that surrounds, although V visited once last year, sometime late into the night. Taking the advantage of Metro, we went there, had darshan of Ganesha from a distance without entering the queue and striked one off my bucket list mentally.

Next comes the lunch time and we zeroed in on Farzi Cafe as the place to go. This was the place where V’s cousin worked as an intern and through him, we got to know more about the place. This place serves some distinct dishes, rather serves regular dishes in a distinct way. Their way of presentation is something worth to be mentioned. They also use something called molecular gastronomy which makes each dish all the more interesting. We tried only couple of dishes for all the practical reasons of appetite as well as the pricing. Another occasion demands another visit to this place and am sure going to try the rest of the things.

Until then, here are some glimpses 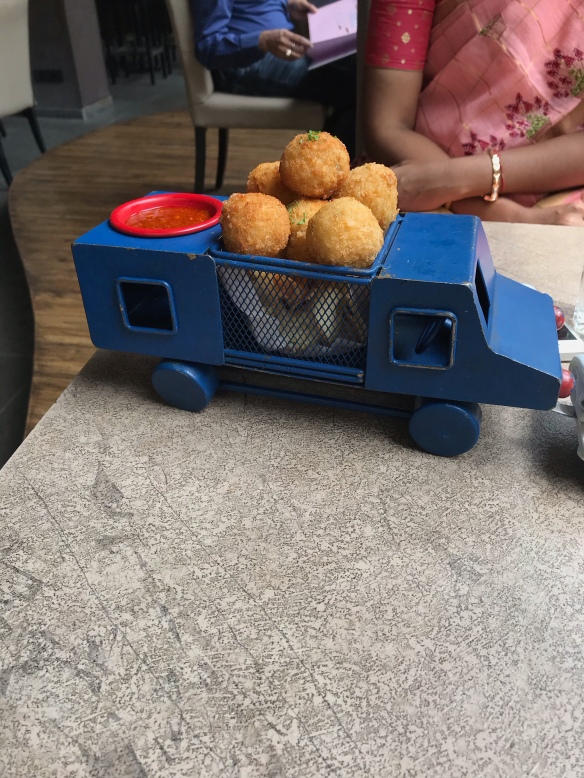 Bombay Bhel, with the effects of liquid nitrogen !

This is how you get your bill !

Any guess for what this could be ? This is the one that comes after the bill. Yup, this is Pan in Farzi style !

Was conducted at A’s school yesterday.

I have never witnessed their sports day in all the past 6 years that A has been a part of this school, owing to the fact that it was always conducted on a week day. So it was always like I used to go just before it ended or I used to skip it entirely. This year, for the first time, they conducted it over a weekend and I had the chance to witness it wholly, from beginning till end.

SIL, V and me had our lunch at home and were seated in the stadium just as the programme started. As it always happens with other events conducted by this school, like Investiture ceremony or Concert or any other, this event too blew my mind and made me watch it in admiration. I so wanted to be a part of the celebration, rather than just be a witness of it. The music that kept playing or changing for each event was so apt and energising everyone. The parallel commentary that happened made one relate everything that happened and be an actual part of it.

The horses walk, trot or whatever ! And all managed by little kids. The kids even managed jumping of the horses around the hurdles. It simply looked quite majestic !

The tug of war between students and staff was fun to watch !

Different formations, martial arts, aerobics by 450 boys, performance by 180 girls, march past, parade, relay runs, regular runs, each one of it was an event to watch.

The event truly stood as a celebration of sports and we were happy to witness it in live !!

Pensieve
Happiness Cannot be Owned..Share it to Feel It !
Dil On The Rocks....

Life With Our Two Little Sensations...