Long long ago, to be precise, a decade ago, the story starts with a marriage. Soon after the post-marriage events, the girl enters her home to be, with packed bags and a much apprehensive mind, accompanied by her brother and in-laws. Of all the things or places that could be shown or introduced to the newest additions to the family, the boy chooses his Bose speakers, an English movie DVD that could do some justice to the speakers, and plays them as the first thing of the family / home to be introduced. The girl is in a state of confusion unaware of the boy’s penchant for the speakers. Over the years, the girl fathoms the boy’s passion for them but the speakers take a back seat as life unfolds with new stuff, new responsibilities and new blah blah.
Until, the long lost love decides to resurface itself, only in a new form !

The girl, who was once a confused soul , now welcomes the love of her other half, with a smile from the heart !

Mornings that were calm are now filled with music everywhere , thanks to this which made its entry at home over the weekend ! 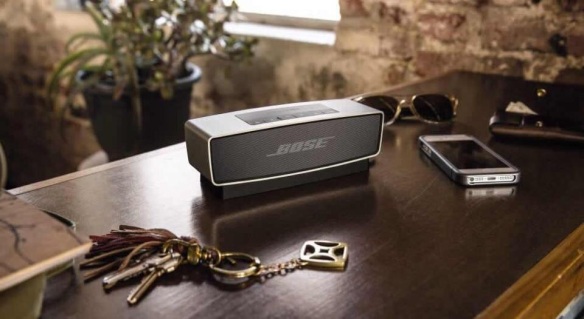 A keeps talking and V reminds her to chew the food in her mouth to which the little lady answers, “We should not chew when we are talking”. She has conveniently transformed our original rule “We should not talk when we are chewing”

A casual talk between MIL and me as to whether to discard or keep for future probable use, the decorated empty card board box which originally contained dry fruits:

A comes to us and asks “Are you going to keep it or shall I take it ?”
A does not need to be offered, she only demands !

For the recitation competition at school, A’s teacher suggests her to practise some facial expressions also. Very enthusiastically, I give her a demo putting all my skills into use.

She interrupts me in the middle and imitates me and says “you don’t have to do that for every word and line twisting all your face, we just need some expressions in between “.

I think she has come to know the difference between action and over action !

While I dress up A for the school :

A says “you are making me look like Snow White ”

Confirming that I haven’t applied too much of powder on her face, I ask her why she feels so and she points me to the collar of the shirt which I have raised up to place the ID card beneath it.

Ah, I never ever paid so much of attention to how the collar of Snow White looks !

Sometimes puts me at so much unease….

A participated in a Relay race for the Sports Day event at her school last Friday. And when parents were also invited to come at 2 P.M., she wanted me to take a leave and come to her school. I told her that instead of a full day leave, I would go to office in the morning and come directly to her school in the afternoon when the event starts and that she should go to the school with her grandfather. The poor girl quietly obliged and I headed to office. As luck would have it, I landed up in such a situation that I couldn’t come back from the office by noon as planned. FIL attended the event and I started back from the office at 4:30, which was much much later after A’s event, but I gathered information that some other performances were going on. I reached school at around 5 and then with FIL , I went to little A, sitting along with her friends and teacher somewhere in the big stadium, and I presented myself as if I was there from the beginning of the event. She seemed quite happy when she asked me if I had seen her in the event and I responded positive.

The thin line where I don’t want to lie but had to, to make her feel happy, puts me so much at unease !

The problem in Maths to be solved by A as homework, goes as :

A reads the question and says aloud :

Ayyo, the children in the village are very less, may be the adults have not gone to hospital after marriage.

p.s. A is using her gyaan, that parents get kids from hospital after marriage, even in maths homework !

2. WHY:
Why do ships and aircraft use ‘mayday’ as their call for help?
BECAUSE:
This comes from the French word m’aidez – meaning ‘help me’ – and is pronounced, approximately, ‘mayday.’

3. WHY
Why are zero scores in tennis called ‘love’?
BECAUSE:
In France , where tennis became popular, the round zero on the scoreboard looked like an egg and was called ‘l’oeuf,’ which is French for ‘the egg.’ When tennis was introduced in the US , Americans (naturally), mispronounced it ‘love.’

4. WHY:
Why do X’s at the end of a letter signify kisses?
BECAUSE:
In the Middle Ages, when many people were unable to read or write, documents were often signed using an X. Kissing the X represented an oath to fulfill obligations specified in the document. The X and the kiss eventually became synonymous.

5. WHY:
Why is shifting responsibility to someone else called ‘passing the buck’?
BECAUSE:
In card games, it was once customary to pass an item, called a buck, from player to player to indicate whose turn it was to deal. If a player did not wish to assume the responsibility of dealing, he would ‘pass the buck’ to the next player.

6. WHY:
Why do people clink their glasses before drinking a toast?
BECAUSE:
In earlier times it used to be common for someone to try to kill an enemy by offering him a poisoned drink. To prove to a guest that a drink was safe, it became customary for a guest to pour a small amount of his drink into the glass of the host. Both men would drink it simultaneously. When a guest trusted his host, he would only touch or clink the host’s glass with his own.

7. WHY:
Why are people in the public eye said to be ‘in the limelight’?
BECAUSE:
Invented in 1825, limelight was used in lighthouses and theatres by burning a cylinder of lime which produced a brilliant light. In the theatre, a performer ‘in the limelight’ was the centre of attention.

8. WHY:
Why is someone who is feeling great ‘on cloud nine’?
BECAUSE:
Types of clouds are numbered according to the altitudes they attain, with nine being the highest cloud. If someone is said to be on cloud nine, that person is floating well above worldly cares.

9. WHY:
In golf, where did the term ‘Caddie’ come from?
BECAUSE:
When Mary, Queen of Scots went to France as a young girl, Louis, King of France, learned that she loved the Scots game ‘golf.’ He had the first course outside of Scotland built for her enjoyment. To make sure she was properly chaperoned (and guarded) while she played, Louis hired cadets from a military school to accompany her. Mary liked this a lot and when she returned to Scotland (not a very good idea in the long run), she took the practice with her. In French, the word cadet is pronounced ‘ca-day’ and the Scots changed it into caddie.

p.s. Post comes from a mind that is too lazy to compose and too keen to post !

Pensieve
Happiness Cannot be Owned..Share it to Feel It !
Dil On The Rocks....

Life With Our Two Little Sensations...