We have learnt what sleepless nights are,
We have experienced hectic days not realizing the start and end of the day
We have been part of moments that seemed totally out of control
We shouted, argued, had lots of petty fights many times
We got frustrated, irritated, short-tempered and lots more….

You make our lives complete!

Happy Birthday A! Wishing you good health and boundless happiness 🙂

I read this sometime back somewhere :

Einstein said to Chaplin: “What I most admire about your art… You don’t say a word, and the rest of the world understands you.”

“It is true”, answered Chaplin, “but your glory is even greater. The whole world admires you, even though they don’t understand a word of what you say!”

Something similar is what’s happening with  me  with the song below :

Neither do I fathom a word of it nor can I repeat a line, but I simply admire the song as V keeps playing it at every opportunity he gets 🙂

Should I be posting about the road trip that we took on Saturday to Kareemnagar to attend  my cousin’s marriage, the roads that were no way near comparision to the vijayawada high-way, but the place and the areas within the city that made my very nostalgic taking me all the way back to my childhood when I would visit my ammamma during the summer vacation, all the ladies glittering away in smiles at the marriage and the reunion of all the relatives that seems to happen only at occassions like these?

Should I be posting about the marriage of another cousin at the same place that I so wanted to attend today, but couldn’t because of the uninvited, inevitable guest that arrives every month to bug me 😦

Should I be posting about the movie ‘Hasi tho phasi’ which I watched with V couple of days back and found that it was not bad after all against my expectations? The lady Parineeti Chhopra definitely seems to have got some stuff!

Should I be posting about A’s dramatic dialogues that melt my heart in a single stroke, that she doesn’t like me having a throat pain, or to be precise, any sort of pain 🙂

Should I be posting about the lack of network connectivity at work today, which made me realise how dependent my job or most jobs have become upon the network and how big a role is being played by it?

The consistently unpredictable mind, instead of choosing one of the above, directed me to post this!

Of happiness is buying frocks for the little one at ‘Brats’.

This little shop, quite easy to miss out, located at Punjagutta, Hyderabad has got very good collection of casual wear for little girls. Haven’t checked out the party wear yet though. And the best part is that there’s a sale going on which makes the collection very very economical. So all the moms of little girls at Hyderabad, if you haven’t tried this out so far, do check it out!

Thanks to ‘Brats’, I did an impulsive shopping of 3 frocks at a time last week, single-handedly, which is not the regular me 🙂

Here are the ones I picked up! 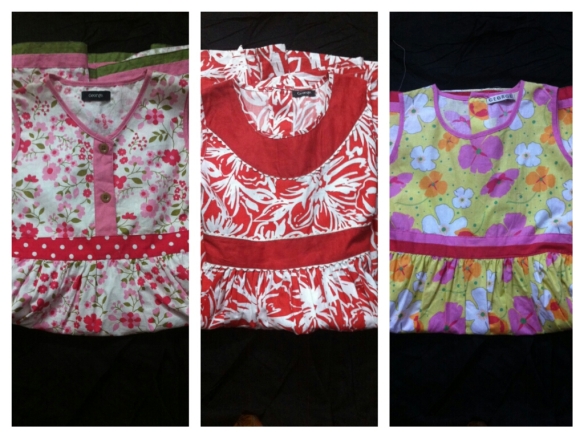 My departure is what lingers on everyone’s mind
And moving me out of my place seems to be the target of many
Lots of ways are discussed about
But a tinge of fear is the factor that prevents them
And the day has finally come when I fall down
For all that comes has to go at sometime,
And now I occupy a solitary place under the pillow….

The tale of a fallen tooth…

A gives her Thatha 3 tamarind seeds, the end-product of what she had eaten at school. When he is about to discard them off, she stops him saying that she needs them to plant trees.

Thatha : But we don’t have any place to plant them
A : Lets plant them in our new bungalow (she keeps dreaming about having a big bungalow of which I do not have the faintest idea )
Thatha : But that’s too far in time
A : ok, I will give it to ammamma and ask her to plant one in the left, one in the right and one at the back of their place

Now its the turn of her Thatha to go speechless  !

To get out of home so that you reach school on time, with bag on the shoulders, shoes under feet and ready to step out,

A : school song amma
Me : we have learnt it, you are good to go
A : we had planned to sing it again after taking bath, but we hadn’t
Me : hmmm, that’s okay, you know it already
A : there’s a dictation test amma
Me : we have learnt all the spellings, go now
A : wait, let me spell ‘behind’
Me : go on
A : b-e-h-i-n-d
Me : good, go now
A : is that the only spelling I got wrong yesterday
Me : yes, everything else was correct
A : have you put the dictation notebook in the bag?
Me : yes, go
A : Telugu and maths books?
Me : yes, go now
A : you are supposed to put those books every day
Me : ok, all the books are in as per the time table, go now
A : amma school song
Me : 100 % fine, gooooooooooo now

Is how the conversation goes between us, I wonder why this girl has to get so many doubts only at that point of time when my heart refuses to beat slower as the eyes keep looking at the clock ticking faster 😦

FIL shows a picture of A’s classmate in FB, whom we all have seen at different times when picking up A from school. But the point is that we just know her name and we have neither talked to her parents so far, nor are aware of their names.The analysis FIL gave us about how he could reach their pictures was, he saw their car’s number while dropping A, got the father’s name from RTA website, and then got their profile from FB. I was simply flabbergasted by his use of the technology 🙂

V’s office guys had planned a meet at Golconda resorts on Saturday, which was to be attended with families. We were there and all the kids were called upon to the platform in the middle of the event. The kids were of all sizes, some bigger than A and some smaller, and were asked to tell either their mother’s or father’s name followed by their phone number, upon which they would be receiving a goody bag. Little A was full of tears as she could not remember either of our numbers, when other kids were trying to tell the data and collect their bags. V, who could not see the little girl in tears called out to me to get the little one down, but I wanted her to give another try by telling the landline number, which she very bravely obliged to. I was quiet moved by how sensitive the little one is and hope she overcomes it soon 😦

I had planned to finish ‘Ajaya’ by Anand Neelakantan over the weekend, but the extent of negativity shown towards non-kauravas is making my pace much much slower and I really am not sure if am going to reach the end of the book.

We had been to Shilparamam to watch the dance performances by V’s cousin and her group, almost all of them of the age of 13-16 yrs. They rendered a splendid performance and the amount of time and effort put in by the girls and the parents is commendable. It was great watching them perform so many items with the same energy till the end.

After we exited from Shilparamam, I was trying to tell FIL to go forward and take a U-turn to go home, as he was not very familiar with the routes.
To this A says, “Thatha, if you go straight, we all will be going to Kondapur”.
Looking at the shocked expression on my face as A is totally unaware of these places or routes, she says “Are you shocked Amma, I just saw the name and direction on the board and told Thata about that !”

Pensieve
Happiness Cannot be Owned..Share it to Feel It !
LIMITEDEDITIONJ

A chronicle of my kitchen experiments, a little healthy a little indulgent